This is the guiding question for “Objects of Conversion in Early Modern Europe,” a conference that will take place at the University of California, Los Angeles in February 2018. The article I’ve proposed to workshop at one of the conference’s seminars is “Possessing Papers and Converting Status in Early Modern Spain.”

As a historian working with early modern manuscripts (mostly from the late fifteenth through early seventeenth centuries), I am interested in both the text and the materiality of archived records. My article is about the physical use of legal documents in the era in which they were produced. Specifically, who carried identity papers and how did those papers function?

Legal records are central to my wider research. My book project demonstrates how Moriscos (converts from Islam to Catholicism and their descendants) responded to assimilationist policies and inquisitorial prosecution with a range of legal actions to protect their families, privileges, and properties. Moriscos commonly wielded permits and proofs of identity when faced with arrests, deportations, or restrictions on their mobility and honour. The records they carried included passports, licences, letters of manumission, and legal records guaranteeing inherited privileges. I find those papers described or copied in court cases, censuses, notarial records, and royal correspondence.

In writing this article, I envision identity papers as objects of conversion. The acquisition and continued possession of such documents could convert the legal identity of the bearer, granting them access to mobility, privileges, and statuses denied to them in the absence of those papers. For individuals recognized as Moriscos, the physical possession and presentation of these documents during encounters with authorities was crucial for verifying identities, proving statuses, and claiming privileges. I’m especially interested in the material features that imbued these documents with judicial authority, including stamps, seals, notarial signatures and rubrics, as well as descriptions of oath-taking (both physical movements and spoken words).

My aim is to illustrate the physical use and judicial authority of identity papers to transform or contest the legal statuses of Moriscos in sixteenth-century Spain. After the Granadan War of 1568-70, for example, Moriscos deportees from that kingdom were banned from travelling, relocating, or carrying weapons. Many Granadan Moriscos requested legal documents that exempted them from some or all of these prohibitions; a good number were successful. Merchants applied for passports in order to travel for trade, gaining access to routes, markets, and freedom of mobility otherwise denied by law to Granadan Moriscos. Deportees who were destitute could alter their legal territorial enlistment by requesting license to relocate, usually to find work or family who could support them. Meanwhile, some deportees claimed complete immunity on the basis of having inherited the status and privileges of Old Christians from forefathers who had converted before 1502 — the year when all Muslims in the Crown of Castile had to choose between Catholic baptism and exile from Spain. Such legal conversions were contingent the possession of papers to alter the status of the bearer. 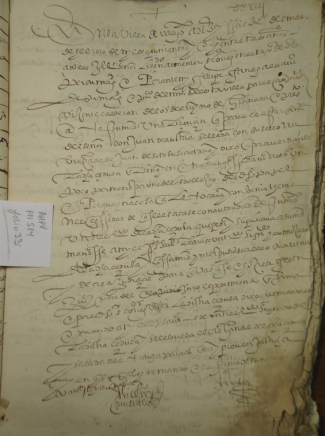 In Valladolid on February 16, 1583, Vicente Calderón appeared before corregidor Armenteros (the city’s chief magistrate and administrator) and secretary Felipe Fanega. He presented a license to bear weapons issued to him by Don Juan de Austria. Calderón was a Granadan Morisco who had served the monarchy during the rebellion of the Moriscos and Granadan War of 1568-70. The commander of the royal forces, Don Juan de Austria, had rewarded his service with this license. But the paper had torn along the creases after years of carrying the license in his pocket, so Calderón asked Armenteros to issue a legal copy of the document. The corregidor and his secretary examined the document, which was deemed legitimate as it was signed by Don Juan de Austria and bore his seal as well as the rubric of his secretary, Juan de Soto. The page in the image on the left describes the presentation and verification of the license; the page on the right is an authenticated copy of the license itself.

With this article, I want to think beyond the information conveyed by text and to think toward the material use of papers. Imagine them carried in pockets, presented before officials, copied by census-takers, and wielded in court. Think about the never-written papers requested for claims made and denied. Consider why it mattered to litigants to acquire copies of legal judgements and of evidence presented in lawsuits. Realize what it meant to have or not have those papers; understand who needed them and who did not. Study how they (and we) trust paper to carry authority and preserve truth.

Can you recommend readings on the topics of materiality and/or identity papers in the early modern era? I welcome comments below, or on Twitter!

“Objects of Conversion in Early Modern Europe” will be hosted by McGill University’s Early Modern Conversions project (I’m the postdoc on this team!) and UCLA’s Center for Medieval & Renaissance Studies. Proposals will be accepted until December 15, 2017. Check out the CFP here.

One thought on “Objects of Conversion”